As Colorado Herald previously reported, pilots are dying at alarming rates, and the correlation between dead pilots and the COVID-19 vaccine is becoming impossible to ignore. Now, the FAA has a “48 Hour No Flight Restriction” after clot shots! That’s right! If you are a pilot and get vaccinated, you’re asked to stay out of the sky for two days…for your safety.

Fact Checkers were quick to not only dispel the article we wrote; they flat out erased the article from Twitter and Facebook, claiming there’s no proof that pilots have died from the vaccine. But pilots clearly have died in droves after becoming vaccinated.

Furthermore, VAERS has turned up multiple reports of pilots who recovered from their vaccines but are left unable to fly again, such as the pilot referenced above. Not to worry…Fact Checkers claim this is all a lie.

According to a 2014 study published in the Journal of Thrombosis and Haemostasis, pilots suffer an increased risk of clotting issues due to frequent and prolonged air travel. Pilots are encouraged to be aware of the signs of deep venous thrombosis and clotting issues and take preventative measures such as compression stockings and stretching of their legs during long flights.

Medical News Today published a study on June 15th, 2021 that showed an increased risk of blood clotting and low platelets in AstraZeneca COVID-19 vaccine recipients. Some scientists hypothesize that since the ethylenediaminetetraacetic acid (EDTA) in the shot causes a full body reaction, once the vaccine comes into contact with platelets inside the human body, the vaccine activates those platelets, causing them to change shape and transmit chemical signals to the immune system. Those platelets send out platelet factor 4 (PF4), which regulates blood clotting.

However, in some people, after some undetermined amount of time, at random, PF4 latches onto the vaccine, and large “complexes” form. Since those complexes are “unknown,” the human body interprets those clusters as threats. Thus, immune cells in the body mistakenly attack PF4’s, prohibiting them from preventing the problematic clots seen in some COVID-19 vaccine recipients.

Aside from the obvious science used here to prove that vaccinated pilots are dying at alarming rates, look to Canada;

“While TC CAM places no restrictions or limitations on vaccines approved by Health Canada, it remains the general position of TC CAM that participation in medical trials is not considered compatible with aviation medical certification.”

It seems that Canada is backtracking on the safety and efficacy of COVID-19 vaccines, especially as they relate to pilots and air safety.

Regarding a pilot who compared forces vaccines to Nazi Germany and asserted his right to medical freedom, Captain Insler emailed, “until then he can go get the fucking shot and collect $4k or he can stfu. His comments are more than offensive.” 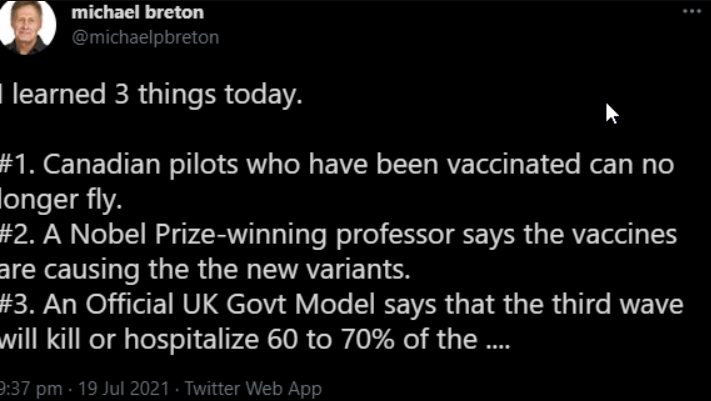 Here are some of the pilots who have died after receiving the COVID-19 vaccine:

Benjamin C Cumberland, reported as “end stage cancer.” His cause of death was listed as cancer, but cancer grounds a pilot for two years…meaning if Cumberland had cancer, he wouldn’t be flying AT ALL.

These are just a few of the people lost to COVID-19 vaccines and flying this year. Say their names. Their lives matter.